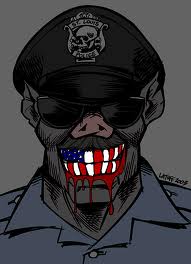 In North Texas, the holiday previously known as “Independence Day” has apparently received a name change. It is now officially known as “No Refusal Weekend.”

“As a part of the enforcement push, anyone suspected of driving or boating while intoxicated, and who refuses to submit to a breathalyzer test, will have a search warrant issued against them for police to take a blood specimen.”

Please be aware that Johnny Law has now been trained at a “blood draw school,” used to train officers on how to take blood from suspects. So now, not only does Officer Un-Friendly have the skills of a baton, wielding, taser zapping, pepper spraying jack boot on his resume, he also is to be feared as a goddamned vampire! And you were worried about encountering face eating zombies!

Remember this while you wave your little war rag and watch fireworks on No Refusal Weekend- "The ‘terrorists’ hate us because we’re free.” I suppose that IS true, yet the “terrorists” are misidentified- they’re the ones with the badges and uniforms who claim to be the good guys! You know, the guys who hate you and your "freedom" so much they forcibly take your blood!

Why is it that on every state holiday, Big Brother gives us an explicit, overt, orgasmic display of tyranny? Is it because he is mad that he has to work on a holiday and takes his revenge out on the rest of us? Or is it the “spirit” of the holiday, itself, that emboldens him to seek ever more extreme and totalitarian actions?

Big Brother does NOT like the idea of “independence.” He has to remind us all just who is in charge. He will gladly and publicly humiliate you if he must. Get this idea of independence out of your head- YOU are the slave and HE is the master.

Resistance is Mandatory
No rulers
No masters
NO CONSENT
Posted by Enlightened Rogue at 4:47 PM