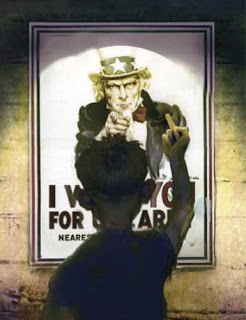 Debating militarists can be very frustrating, but I believe worth the effort.

I despise the military as an institution. Of course, I share no love with its controlling state apparatus, as well. Those civilians who comprise the state are the controlling thugs of the operation. They are usually hidden and unapproachable. Lying is a big part of their profession, to the point of being pathological. They are usually too self-deluded to realize the immorality of their institution because of the monetary compensation they receive to strengthen and operate it. These folks I usually debate merely for the mental exercise, as the possibility of successfully converting them is virtually nil.

The military, however, is merely the armed wing of the state‘s bird of prey. It’s responsible for enforcing the evil edicts emanating from the civilian thugs.

I feel my chances for successful conversions are much higher with this group for the simple fact that they are being shot at. Risking your life requires constant affirmation that your decision to do so is sound. It’s part of the inner survival mechanism of human beings.

In my debates with militarists over the years (meaning enlisted military personnel, retirees, and their chicken hawk supporters) I’ve been able to recognize three distinct types of debaters:

1) The intelligent, articulate individual who vehemently disagrees with my anti-state position, but does so respectfully while eloquently outlining his position. These folks should be instantly recognized as worthy opponents and be returned the respect and civility they have given you. Chances are good you believed (and presented your belief system) exactly the same way, at one time. This should make it easier to draw your argument as you illustrate, point by point, how you were convinced your comparable belief system was false and immoral. Your chances of immediate success with this type of individual is low. But continue to be consistent and rational in your argument. More than likely this individual will have the integrity to recognize your argument has merit and is worth pondering.

The idea, at the very least, is to plant a seed. As that individual continually questions himself and debates others that seed will be cultivated. The trick is to expose the corrupt institution he is a part of without insulting the individual. You have to remind yourself that this is a thinking, cognitive person. If he wasn’t, he wouldn’t be debating you in the first place.

2) Those who have had an epiphany and agree with you to so some extent, but will attempt to rationalize the evils of this institution as necessary.

Some of these folks articulate your message and argument so well that you wonder how they were convinced to enlist in the first place. However, they still must be convinced of this institution’s lack of integrity and legitimacy. Direct them to resources where they can obtain the knowledge that will lead them to this inevitable conclusion. They must also be convinced that they are powerless to change or “reform” this homicidal organization. They must be persuaded that disengagement is the only rational action to take.

3) Those who vehemently disagree and pepper their illogical arguments and non sequiturs with profanity and insult.

When they respond with phrases such as “I love war” and “I run to the sound of gunfire” it is probably not a good idea to immediately continue debate. Leave time for a cooling off period for them, as well as you.

Why would you need time for cooling off? If you are like me, the first reaction to such blatant hostility is to return my own version, feeling no obligation to restrain myself as I pick apart their depraved, illogical arguments and express insults of my own. This is a complete waste of time. Any hope of intelligent debate is lost as both parties resort to out doing each other at creating clever insults. If you do eventually respond to such hostility, do so in a very tempered, even tone, presenting your argument in the most concise, understandable manner that you are capable of. If the response is still more hostility, write this individual off as a hopeless cause- for now. Keep hope in the possibility that you may have planted a seed, despite the antagonism.

I have walked this earth for over half a century and have been exposed to every kind of statist indoctrination imaginable and have also been around long enough to realize the existence and characteristics of that indoctrination.

I can only hope that afflicted, enslaved soldiers take the time to analyze their situation, continually seeking the truth. Hopefully they will finally realize the deceit their masters have perpetrated against them.

Most all of us have been victims of this brain washing. We were born as slaves of the state and conditioned in their schools to accept that notion as not only reality but as a definition of “freedom.” That process is stepped up a notch when one enlists in the military. Yes, this means an even harder shell to crack to complete a moral rebirth. But this individual also has the most to lose.

Many excuse war as a reality that cannot be eliminated, only adapted to. I disagree. War will certainly not be ended or even reduced through political involvement. War is a natural extension of politics. The only power an individual really has is over how he lives his life. Live your live in a peaceful, non-aggressive manner and your chances of not creating any strife are pretty strong. Next, encourage others to live the same way and prove to them (by your behavior) why this lifestyle is preferable over waging violence and intervening in other’s affairs. Peaceful involvement and action is infinitely more productive than conflict. Conflict merely breeds still more conflict. The more people who believe and live this way, the fewer potential combatants nation states have to recruit. The Golden Rule is not just a nice sounding theory. It works!

Wars cannot occur without willing participants. Tyrants without armies are impotent. The goal should be to prevent as many young people as possible from joining this institution. Likewise, it is absolutely necessary that we convince those presently enslaved to break free from this abusive relationship as soon as possible.

These folks (militarists) are already victims of the allure of nationalism. Let’s work to prevent them being eaten by the beast of war.


Resistance is Mandatory
No rulers
No masters
NO CONSENT
Posted by Enlightened Rogue at 12:04 PM

Excellent article, Roger! I just discovered your blog thanks to your recent LRC article and really enjoy your material.

I find this particular article especially relevant, given my own conversion nearly fifteen years ago from conservative militarism (I spent nearly two misguided decades as a seagoing mercenary) to libertarianism.

I find only one very minor point of contention in your article, and that is your contention that the civilian government is separate from the military. While that might have been true in the days when something of a constitutional republic still remained, the sad (actually horrifying) truth is that many "civilians" operating within the executive branch of the federal dictatorship are, in fact, retired military officers. This has become especially prevalent over the last two decades, in the wake of mass retirements from the bloated Cold War armed forces, and the inevitably resulting explosive growth and metastasis of the Military-Industrial Complex (speaking of which, Ike's farewell speech of January 1961 was pure hypocrisy; the man did NOTHING during his eight years in the White House to curb the growth of the monster he warned against). This has led to the military slowly, subtly, and unmistakeably spreading its tentacles into civil government. Again, this is a minor quarrel. Otherwise, your classification of militarists is dead-on accurate, as is your philosophy for how to deal with each type.

Keep up the good work!

Great point! I may not have worded that as well as I should. I was separating the two to highlight the difference between debating ensconced apparatchiks (politicians, bureaucrats, etc.) and military members. From my experience, military members are actually easier to reach. I think it’s probably because they witness first hand the inevitable and ultimate failure of statism- war.