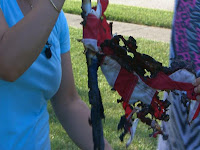 Some US flags were recently burned in a local suburb- an activity you would certainly wish to see more of. But in this case, the flags were not the property of those doing the burning.

While reading the report and sifting through the usual extremist, collectivist, claptrap phrases such as, “it’s everybody’s flag in America,” and “it’s a slap in the face for all Americans,” this quote caught my eye:

“The monetary value is nothing, but the patriotic value is all to me.”

That kind of says it all. These fools are more upset that their worshipped, demonic symbol was destroyed than they are about the infinitely more meaningful fact that their property rights were violated.

Their reverence toward the civic religion’s cloth banner is a stronger provocation of anger than the reality of trespass and destruction of their personal property. Their religious fanaticism regarding the mythical character of the God-State is the prime motivator for their indignation, rather than the unacceptable encroachment on their sovereign, personal space.

That fact tells me that they can thus be easily convinced by skilled, state propagandists to give up those property rights if it serves the interest of the state or even the protection of its goofy symbols. By making such a statement about value, they’ve exposed a spiritual weakness and lack of reason that state criminals will be more than willing to exploit.

Now that possibility should upset readers more than the incineration of a few war rags.


Resistance is Mandatory
No rulers
No masters
NO CONSENT

Posted by Enlightened Rogue at 12:59 PM