Snapshot of the State - Misjudging the Courage of Individuals 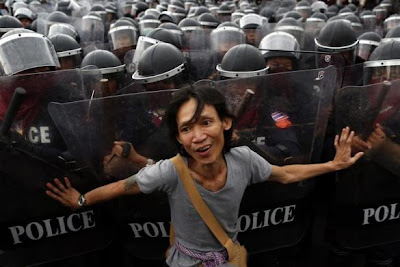 "You cannot run away from weakness; you must some time fight it out or perish; and if that be so, why not now, and where you stand?"

Hired Killers Give Thanks in Afghanistan 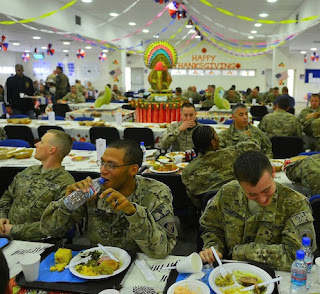 Oh yes, they’re all SO thankful for the opportunity to kill brown children, blowing them to bits and joyfully viewing their bloody corpses.

They’re all SO thankful to be guarding the poppy fields and aiding the CIA’s heroin smuggling.

They’re all SO thankful to be serving their state masters and corporate oligarchs, working hard to destroy and destabilize civilization throughout the world.

They are SO thankful to be acting out their psychopathic yearnings, fueled by years of perverse video games, to shoot, bomb, and destroy anything that moves.

They’re all SO thankful to serve and protect a criminal, despotic regime hell bent on world domination.

They are SO thankful for the opportunity to offer their lives and limbs as cannon fodder in a patriotic gesture of human sacrifice.

They’re all SO thankful to be robbing their neighbors back in the Fatherland to pay their bloated paychecks, overly generous benefits and cushy pensions.

They are SO thankful for the ability to compartmentalize their crimes, strengthened by a lifetime of nationalist propaganda.

They are just SO thankful to realize their childhood fantasy of killing, robbing and pillaging.

I wrote the following piece the day of the 2004 presidential election. My sentiments and opinions remain the same.
Nov. 2, 2004
I first voted in a presidential election in 1976. I have voted in every one since- until today. My choice in the last three elections was the Constitution Party- a hardy, decent bunch, working fruitlessly to resuscitate a document, long since deceased. I decided this year to not only NOT vote, but to spend the day avoiding, the best I could, the stimuli and intense fervor that seems to abound on election day.

Productive work can keep you focused. Instead of the pointless noise and turmoil of election activity, my attention was served by the innocent beauty of smiling school children in front of my camera. As a bonus, God favored me with an assortment of autistic youngsters to challenge my skills and allowed me to appreciate whatever world their mind resides in; their mental processes wonderfully oblivious to the surrounding carnage of politics. What is the greater accomplishment- coaxing a smile from a hesitant moppet to be joyfully preserved forever on celluloid or wracking my brain over a ballot, deciding which political pervert is more qualified to kill similar innocents on the other side of the world?

A short break allows me time to witness the sight of children at play; running, shouting, enjoying the pure delight of the moment. While a short distance away their parents and neighbors are deciding what tyrant will dictate their future, wash their growing minds clean of individual thought, and determine which bloody battlefields they will be obligated to visit. The realization of this sickening irony turns my stomach.

Traveling the route home takes me by the local polling station. Innumerable campaign signs clutter the right-of-way like so much profane, gang graffiti. A turf war is underway just inside with ballots being the weapon of choice. I think, “Why vote with ballots backed by bullets when I can vote peacefully with my dollars and my feet?” At the end of the day’s battle the tickets will be rounded up and counted; the majority totals giving legitimacy to a new array of masters.

Once home I search for a cerebral escape. Beauty in the form of music is a great diversion. I enjoy listening to the anguished lyrics of Steve Earle, later to be countered by the lifting, soaring, looping guitar lines of Dickey Betts. Whether representing the emotions of joy OR pain, music is beautiful; either by soothing the soul or reinvigorating it. Meanwhile, the political games of power hungry men elicit merely pity and shame.

No election media coverage is watched, read or listened to. No final speeches by begging, desperate shysters is paid any attention. The market has provided me two of the greatest inventions of mankind (the mute button and the VCR fast forward) to cleanse my television of idiocy [I no longer watch television]. Long may they function! Shifty pitchmen, pleading for my confidence, fall delightfully silent or pass my view in a blur of hapless futility. Their message falls on deaf ears and shielded eyes.

The polls are closed and my vote is missing from the pile. Yet, my mind is at peace and regret is nonexistent. The electoral outcome is considered irrelevant. Satisfaction and contentment comes from knowing that time has been productively spent. Sleep comes easy.

Nov. 3, 2004
The sun has risen, as always. The pre-election warning of “Vote or Die” from the American ghetto is now even more laughable. Some tyrants remain in place to extend their term of destructiveness. Others are new to the scam, busy charting future paths of theft and death while their obedient serfs behold and regale their new saviors. I pay no attention to, nor attempt to remember, their names. Why bother?

NO CONSENT
Posted by Enlightened Rogue at 8:30 PM No comments: