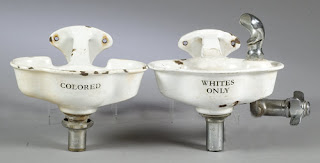 In case you don’t know it, the NAACP is an acronym for the National Association for the Advancement of COLORED People.

If you’re like me, “colored people” brings back unpleasant memories of the era of Jim Crow, racially segregated bathrooms, and lynching. The term “colored” was used as an obvious opposite to “white” and that group's declared superiority. Just try referring to African-Americans as “colored” in public today and you’re likely to hear complaints from at least one party. It’s just not done. It’s outdated and unacceptable- and for good reason.

The National Association for the Advancement of COLORED People claims part of their mission is to, “promote equality of rights and to eradicate caste or race prejudice among the citizens of the United States” and "to advance the interests of colored persons." They not only use that offensive word in their mission statement, but also as part of their organization's name!

Does referring to African Americans as “colored” help or hinder with this stated goal?

The National Association for the Advancement of COLORED People is fully involved in the recent purge of Confederate flags in the south.

Recently, an “activist” climbed a flag pole at the South Carolina State Capitol and removed the Confederate flag. In a statement on its website the group's president, Cornell William Brooks, included this gem in his support of the “activist’s" action:

“The NAACP stands with our youth and behind the multigenerational band of activists fighting the substance and symbols of bigotry, hatred and intolerance.”

Apparently, Mr. Brooks fails to see the “bigotry, hatred and intolerance” of still using, in this day and age, the term “colored people” to refer to African-Americans.

In Dallas, the cultural purge is soon expanding to the removal of confederate monuments. The National Association for the Advancement of COLORED People, “will meet next week to talk about Confederate landmarks in North Texas and decide which ones they will push to have removed.”

"If we are going to move forward in America, as Americans, we have to let go of those symbols," says Arthur Fleming, President of the Dallas chapter of the National Association for the Advancement of COLORED People.

Perhaps Mr. Fleming should first look in his own back yard for such symbols. Like his organization’s name! Using racist terms to describe the people you claim to care about is not a good way to “move forward in America.” How can you “move forward” if you still use unacceptable language from the past? How can anyone even take you seriously?

"We're in a period of time when we can change some things," continues Mr. Fleming.

Agreed, Mr. Fleming! You can start such necessary “change” by changing your name!

"Just says certain things have not changed," Fleming said of his thoughts when he sees a Confederate monument. "That's what it means to us."

People of reason and logic, who can spot a race hustling hypocrite from a mile away, agree with you, Mr. Fleming. “Certain things” have not changed. Some continue to use racist language from the past while supposedly working for a racism-free future. That's what your hypocrisy "means to us."

Too many people continue to bow and scrape to such hypocritical and arrogant attitudes. Too many people still consider such shakedowns (both cultural and financial) as sincere pleas for change, rather then accept the reality of their authoritarian, culturally insensitive, and yes, racist nature. And not enough people are willing to expose the otherwise obvious hypocrisy hiding behind apparent good intentions.

Cultural cleansing and dogmatism, as shown by Mr. Brooks and Mr. Fleming, has preceded many murderous, totalitarian campaigns in the past. Here’s hoping that these gentlemen’s obvious hypocrisy is a roadblock to their absurd and potentially dangerous enterprise.

Posted by Enlightened Rogue at 4:24 PM No comments: 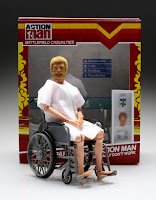 The perfect gift for your favorite loyalist, troops supporter, or war profiteer
Posted by Enlightened Rogue at 4:55 PM No comments:

This video appeared on a local news site today:

I forwarded the URL to the Washington bureau of the NAACP, hoping they would comment on and help publicize an obvious hate crime.

Here was my message:

"I just wanted to forward this important information to you about a recent hate crime in Rowlett, TX:

I know you will want to help publicize and comment on it. Failure do so will disappoint many in this area.

I have yet to hear back from them as of this date. If you would like to contact this same bureau, the address is washingtonbureau@naacpnet.org

Maybe you can also ask them why they still offensively refer to African-Americans as “colored people.”

UPDATE- 6/27/15: Police say they have now identified the teens responsible and have issued warrants for their arrest.
Still no comment or reaction from the NAACP about this heinous, despicable, hateful crime.

UPDATE II- 6/29/15 Police have arrested a teen for assault.
Awaiting ardent demands by the local NAACP to classify this act as a hate crime.

Posted by Enlightened Rogue at 2:52 PM No comments: 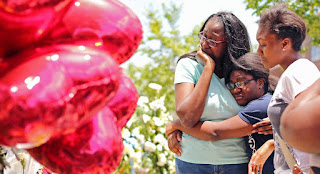 Beyond the obvious idiocy of blaming guns, racism, flags, and the unregulated internet for the multiple murders in Charleston, I’ve observed other disturbing behavior from sympathizers and their post-murder behavior.

Have you noticed how these “professional victims” literally revel in the misery created by such an event? I mean those who go way beyond the standard mourning activity. I’m speaking of people who wrap themselves in their collective misery like a soothing, protective cocoon. I’ve witnessed this multiple times when such a disturbing event occurs.

The media is all too willing to publicize their depressing, candle holding, fervid, sniveling- hoping to inspire guilt in those who had nothing to do with the murders (meaning in this case, all white people, gun owners, and southern nationalists).

It’s easier to whine, moan, and excessively grieve, rather than take definitive action toward finally taking responsibility for your own protection.

It’s easier to beg for help and defense from a political master rather then train yourself and others to resist predation from other individuals.

It’s easier to soothe your grief by directing anger at innocent people and inanimate objects rather than be enraged that these victims were not allowed or restricted by their political masters to arm themselves.

It’s easier, and even encouraged, to bow to the ground and chant prayers to the sky rather than make use of that amazing, earthly organ within your skull.

And all this behavior is indicative and characteristic of those who choose to live their lives as slaves- and even morbidly celebrate that fact.

Do they react with outrage that their political masters frown on such individual defense and responsibility? No, they beg for still more controls, authoritarianism, and "solutions" that further enslave individuals.

“Never again,” they scream, thinking such a collective demand will automatically be satisfied. But without subsequent individual change and action, such exclamations ring hollow, indeed.
Resistance is Mandatory

Is It Wrong to Wish That Tyrants Die? 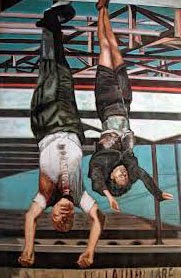 Have you ever felt so disgusted, so enraged, so frustrated with a state politi-gangster/criminal that you wished, even secretly, that they would die? Is it wrong to feel that way? Do you demean yourself by feeling and expressing yourself this way? Can such a wish be considered a threat?

It’s easy to understand why you think this way. You wish them dead due to suffering personally or suffering empathetically towards others who have been abused, mistreated, and even killed by their ruling master . You reserve such hatred for only the most egregious, murdering despots.

I don’t recommend actively pursuing a plan of action to see that such an event occurs, but I see no problem with desiring such an occurrence. I would only avoid allowing such thoughts to become an obsession.

Wishing for the death of murdering, thieving tyrants is a purely natural part of an individual's action of self defense against a predator. It’s a psychological response to a threat where no active, physical response is practical or wise. Better to ease your frustration with bad thoughts aimed at deserving evil individuals than direct, suicidal confrontation. Better to relieve feelings of helplessness and impotence within the private, inner sanctum of your malevolent thoughts than face your target’s protectors.

Fantasy is a psychological defense mechanism that channels unacceptable or unattainable desires into imagination. And it is largely risk free.

Don’t listen to those who suggest shame for thinking that way. They still believe the life long conditioning that self appointed elites are your superiors (despite their despotic extremism) and that it is somehow “wrong” or “unpatriotic” to not remain subservient in action and thought to this perceived “authority.” Their lingering state worship and enslavement is clouding their judgment.

Keep violent, wishful thoughts if you must. It’s healthy. Just don’t forget to take only direct, peaceful action towards sidestepping such tyranny.

And you can even laugh at them while you do it.


NO CONSENT
Posted by Enlightened Rogue at 8:32 AM 1 comment:

Posted by Enlightened Rogue at 4:47 PM No comments: