Madam Nancy Explains to the Children What ‘Independence’ Means

Why, it means ObamaCare, of course. “Independence” means health independence (whatever the hell that is). This wonderful law “captures the spirit of our founders” according to this wise sage. ObamaCare offers “life, liberty and the pursuit of happiness,” don’t you know. And don’t forget, Medicare and Social Security contribute to your “freedom and liberty.”

Is it inevitable- will Shrub Boy and Drone Boy be arrested? And which TV network will negotiate the rights to broadcast their hanging?

Posted by Enlightened Rogue at 8:46 PM No comments: 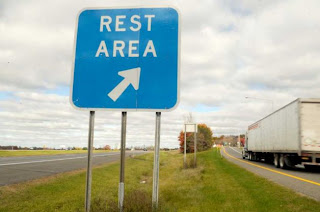 Memorial Day always seems to bring the kooks out of the closet in the US Collective. Loyalists and militarists seem to find ever new, ever more fanatical ways to express their worship of the murderous nation state and its loyal cadre of hired killers. This past Memorial Day was no different.

For nearly four decades, members of the VFW have greeted travelers at a rest stop just south of Burleson on Interstate-35 West. The military veterans, along with other volunteers, serve coffee and snacks for free to weary travelers over the holiday weekend to help keep drivers awake.

But the Texas Department of Transportation has plans to close this particular rest stop because of a new stop opening just 50 miles down the road.

The veterans asked travelers this weekend to sign a petition to keep the rest stop open.

Of course, a “petition” is nothing more than an instrument of supplication used to beg rulers to commit (in this case) acts of violence against other individuals by seizing their assets to fund a project (rest stop/meeting place) that the petitioners desire. No thought is given to those individuals who will now be poorer after such a confiscation. What’s more important is to satisfy the appreciative ambitions of war groupies.

Over the years, travelers have gone out of their way to stop at this particular North Texas rest stop on Memorial Day to say “thank you” – and not just for the free coffee.

Translation: It appears that some folks have nothing better to do than to stop and thank these ex-killers (still thankfully, whole in body, if not soul) and thank them for serving the imperialistic foreign policy of their DC rulers.

“It’s a Memorial Day thing. I know that they are always here. I stop here every time.”

It’s also a collectivist “thing” to assume others should pay (and have no disagreement with paying) to maintain the meeting place for such an occasion. No mention is made of any privately funded and operated alternatives to such a “tradition.” That, of course, would be the desired, peaceful, civilized way to solve the problem. But militarists see every problem as a “fight” and look for a party to commit violence against in order to get their way.

Militarists continue to believe that all individuals not only should, but are obligated, to support any conceived idea to heap praise, thanks, love, support, and reverence upon those who willingly killed to support the bloody ambitions of modern day conquistadors.

That’s bad enough. But what makes it even worse is how they arrogantly designate such action as someone else’s burden.


No rulers
No masters
NO CONSENT

Posted by Enlightened Rogue at 4:50 PM No comments:

Sometimes, Evil sits back for a spell and let’s Good display it’s inspiring, spiritually enlightening self. Evil tries to fool the masses that yes, it resonates with and appreciates what Good is trying to say. Such is the case in this video. Don’t be fooled!

Look at Obombya, acting like he digs it and “gots soul” - while his drones murder children throughout the world.

Be a witness- good and evil can exist right next to each other- merely a few feet apart. It’s up to YOU to determine which is which.

Posted by Enlightened Rogue at 7:17 PM No comments: