Too Late for Resistance 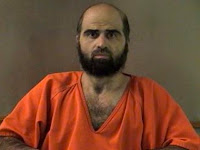 Nidal Hasan is causing a ruckus. The man accused of murdering 13 of his fellow slaves at the Ft Hood, Texas Military Plantation refuses to shave his beard in violation of a judge’s order.

The resistance toward his military master comes a bit too late for Mr. Hasan. Apparently he doesn’t understand the reality of his relationship; Once a slave, always a slave- even when condemned and cast off the plantation by his demonic master. Even choice of facial hair is restricted for life for those voluntarily and permanently enslaved by military “service.”

To stay true to his faith, Mr. Hasan chose his master’s method of action (killing) instead of merely refusing to longer serve that master and suffer the consequences. He could have sought Conscientious Objector status and given the opportunity to eloquently explain the reasons for his withdrawal and outline his master’s murderous activities that inspired such action.

Though he chose the wrong course of action, it can be argued that his choice to kill did expose some inconvenient truths.

Please remember, if he had just murdered the “right” people, Mr. Hasan would be lauded as a hero, not a pariah. He’d right now be receiving a pretty lil’ piece of tacky, scrap metal to hang on his chest instead of awaiting life imprisonment or execution. Killing is only evil in the eyes of the state if you victimize the wrong people for the wrong reasons.

Mr. Hasan’s murderous action helped expose just how impotent and incompetent the US military is as a defense agency. They are charged with “defending” others, yet cannot even protect themselves
from one of their own while in one of their own “secure” facilities. Hired assassins not even carrying a weapon? Pathetic!

On 9/11 this “defense” agency never lifted a finger to “defend” anyone. Yet, they never hesitate a moment to kill and destroy to satisfy the greed of international bankers and the blood lust of the Bush/Obama Regime and its adoring minions.

To avoid Mr. Hasan’s predicament, make sure you only kill for the state- the “right” people for the “right” reasons.

Resistance is Mandatory
No rulers
No masters
NO CONSENT
Posted by Enlightened Rogue at 8:18 PM