Another Reason to Dislike Rand Paul 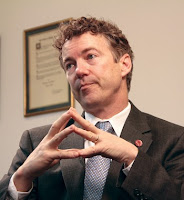 I quit voting twelve years ago. Not long after, I removed my name from the voting registration roles. One nice benefit of doing that is that it clears your name from the party mailing lists of local and national, aspiring politi-gangsters. When election season arrives, you don’t have to waste precious time sifting and sorting through piles of obnoxious pamphlets, letters, brochures, and inserts sent by sociopaths proudly boasting how they are far better qualified to rule your life and property than their esteemed (but equally sociopathic) opponents.

Since then, the only political mailing list I was on was Ron Paul’s. He’s had my name since back in the late 1980’s when I subscribed to his gold newsletter. He had to give that up when he returned to Congress but I have since received his regular congressional newsletter. Recently, I opened my mailbox to find a letter from some gun rights organization I had never heard of. On the envelope and the form letter inside was Rand Paul’s name, boldly and prominently displayed. Obviously, Rand Paul had obtained my name from a list owned by his father’s campaign. If this alliance with the gun organization was Ron’s idea it would have been his name on the letterhead, not his conniving son’s.

About a week later, I find in my mailbox a letter from the Mitt Romney campaign. Though I didn’t bother to read it, I’m sure it glowingly bragged that the corporatist/facist, unprincipled Mittens was the obvious choice to rule me from the DC death pit. The only way his campaign could have received my address is from the smarmy opportunist named Rand Paul, who has already publicly abandoned his father to serve the interests of Mittens. Ron Paul has refrained (as of now) from making such an endorsement.

I’m sure the Mittens campaign will disperse my name down the chain of criminals that will serve underneath him and they will contact me begging for scraps to bolster their campaigns. So now, guess what I have to look forward to for at least the next four months? Why, cleaning political pornography out of my mailbox on a near daily basis, of course. All thanks to some arrogant, inconsiderate, state worshipping thug from Kentucky who would probably back stab his own father if it could possibly further his political career.

Oh, wait. He already done did that.

Resistance is Mandatory
No rulers
No masters
NO CONSENT

Posted by Enlightened Rogue at 10:41 AM