The Self-Inflicted Persecution of Kim Davis 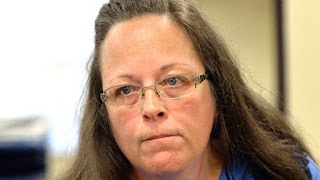 Kim Davis is the Rowan County, Kentucky clerk who was jailed (and since released) by a U.S. District judge. Her accused crime? She refused to issue same-sex marriage licenses as authorized by a recent U.S. Supreme Court decision. This action has inspired a multitude of opinions concerning the justness of the actions of both Ms. Davis and the District judge who had her jailed.

First, I must admit a perverse pleasure in reading of such cases where the state “eats its own.” These are situations where state apparatchiks suffer the consequences of the state’s illegitimate “laws,” rather than enslaved mundanes who usually bear the brunt of such criminal interventions. Better to see a parasitic state operative suffering the wrath of their state master than non-consenting tax slaves who generally suffer the bulk of such abuse and who are also forced to finance such an operative’s lofty position of power. My empathy is saved for such non-consenting sovereigns- the truly “persecuted” ones.

I’ve read two, well written and logical analyses regarding this case. One claims Ms. Davis is being persecuted because she obeyed her state constitution, the other insisting she is rightfully being disciplined (though unjustly jailed) for not obeying an overriding, higher ranking constitution. Both views make sense to me but both presuppose the legitimacy of such a governing state that claims to govern and rule individuals. It also assumes that state created “constitutions” are equally legitimate as control mechanisms that regulate this institution’s ruling power. Though I respect this popular default perspective, it has become my secondary, not primary, perspective when viewing state created conflicts.

As one who believes that all men are born sovereign and free, only to be rightfully governed and ruled by their individual consent, I view such state created conflicts without the presupposition of the state’s legitimacy.

Knowing this, let’s begin my analysis with an examination of the players involved in this seedy drama:

The State
The state is an institution claiming governing and ruling power over a designated geographic area. Despite any state created designated limitations on its power (constitutions), this institution is prone to ignore such designated limitations if it so serves its relentless pursuit of more power. Neglecting such limitations is often defended with decisions made by state created courts who have the power to interpret such limitations. Such interpretations can only be overturned by the state itself. The state has thereby evolved into nothing less than a criminal mafia, financed through extortion, while claiming near limitless power and ultimately being accountable to no one. It is a self-regulating cabal.

Claiming the authority to ignore such designated limits of its power at its discretion (and confirmed by its own courts), the state has become involved in virtually every behavior, action, and transaction involving individuals. It has built itself to be a gatekeeper to nearly every conceivable human activity. The particular intervention discussed here is marriage.

Kim Davis
Ms. Davis, born as a sovereign and free individual, has chosen to discard her intrinsic sovereignty and consented to be governed and ruled by the state. She has done this by voluntarily becoming a paid, state operative, subject to the orders of her superior. The institution she works for is funded by coercive taxes enforced through violence, not voluntary contributions. Her duties include enforcing state dictates claiming power to permit or deny a “legal” marriage between individuals.

The conflict
The conflict arises when Ms. Davis refuses her master’s dictate to issue “legal” permission to marry among same-sex individuals. She defends her refusal, citing that allowing such a marriage is a violation of her Christian religious principles.

Any time I hear individuals adamantly citing religious objections to defend their actions my ears perk up. Such claims often come from those who pick and choose just what “principles” they fervently follow and those they don’t. Such is the case with Ms. Davis.

Why? Christians govern themselves in large part by doing their best to obey the Ten Commandments. Check out Commandment #8. Ms. Davis chose not to make her livelihood by way of free market, voluntary transactions with solicited customers. Instead she chose to become a willing, consenting employee/operative of an institution that funds itself through coercive taxation/theft that is enforced at the point of a gun! Such criminal activity is what directly funds Ms. Davis’ lucrative paycheck. As a declared Christian, what part of “Thou shall not steal” does Ms Davis not understand?

Conclusion
In the smoky cloud created by the state’s ambiguous legalities and varying interpretations of “law,” Ms. Davis’ plight can viewed as both fair or unfair. From the clear and unambiguous perspective of individual human sovereignty, the inherent right of consent, and the necessity of personal accountability and responsibility, Ms. Davis has created her own nightmare. She unwisely and voluntarily consented to being a paid operative of an inherently unjust criminal operation. Criminal operations rarely have qualms about persecuting their members if it serves their goals.

Ms. Davis’ religious objections ring hollow to observers who view her participation and employment with an institution funded by violent theft- an action that patently violates one of the most basic tenets of her adamantly declared religion.

It is my contention that the punishment suffered by Ms. Davis is self-inflicted, and she is ultimately responsible for her unwise choices and decisions.

I offer no pity for her, as she willingly and voluntarily became part of the state apparatus that now “persecutes” her. This lack of pity is further intensified when considering her blatant religious hypocrisy. My empathy, as always, will be saved for those non-consenting sovereigns (no matter their spiritual consciousness) who continue to suffer persecution from a bloated leviathan whose appetite for power and control is insatiable.


Resistance is Mandatory
No rulers

Posted by Enlightened Rogue at 3:27 PM No comments: