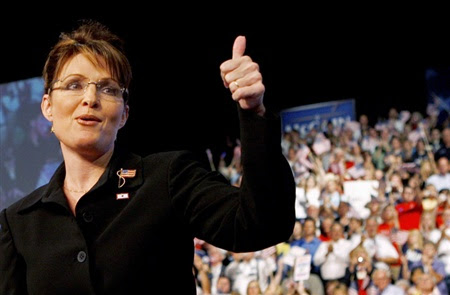 I did not watch a single second of the political conventions. I read a few news reports and observations- just enough to keep up with the evil intentions of politi-gangsters that claim to own me. One detail that caught my eye was that Sarah Palin has a baby born in April. So here’s a woman that doesn’t hestitate to abandon her newborn (with Down’s Syndrome, no less) in order to become part of the murderous Amerkian regime. Is not power the ultimate seductress?

If elected, watch Sarah as she explains how the state owns your children.
Watch Sarah justify taking the lives of foreigner’s children as an acceptable cost of maintaining imperialistic ambitions.
Watch Sara lead the cheers for those solider boys directly responsible for taking those lives.
Watch Sarah encourage the sheep to sacrifice their children (not hers) in the Amerikan Empire's growing list of wars.
Watch Sarah neglect a special child with special needs that only a mother can fulfill.
Country First!
Queen Hillary must be so jealous to find that there is a new War Wench on the block; a War Wench even more bloodthirsty and unconscionable.
Posted by Enlightened Rogue at 1:33 PM