The State is Obsolete 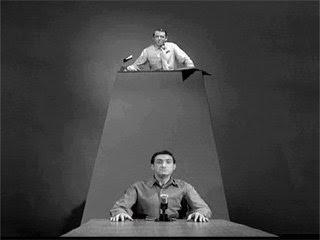 "The chancellor was correct- he was obsolete. But so is the state, the entity he worshipped."

I’ve been viewing episodes of Rod Serling’s Twilight Zone on a local TV station. Most are quite enjoyable but one has stood out from the others, and I highly recommend this episode as “must see” TV. The episode is entitled “Obsolete Man” and is brilliantly conceived and written. It not only terrifically demonstrates the state’s obsoleteness but its illegitimacy, as well. Mr. Serling sums it up accurately:
“Any state, any entity, any ideology that fails to recognize the worth, the dignity, the rights of man- that state is obsolete. A case to be filed under “M” for Mankind…in the Twilight Zone.”
Posted by Enlightened Rogue at 12:08 PM

Very interesting stuff there. I will have to check it out.