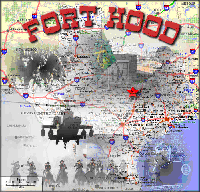 The wise, worldly editors of the Dallas Morning News have seen fit to name the “Heroes of Ft Hood” as their Texan of the Year:

“For their dedication, service and so much more, we salute the heroes of Fort Hood as the 2009 Dallas Morning News Texan of the Year.”

The News has chosen to honor those who “hear the call” to kill on command as the ruling regime sees fit. After all, they have pledged their lives to defend those who have lied to, plundered, and tyrannized the American people. They have “sacrificed” to make reality the perverted, depraved, arrogant, murderous, insane plans of the American Oligarchy. It’s their “duty,” by God! Why shouldn’t they be honored?

But seriously, I’m sure the News would not have extended such an “honor” if 13 soldiers hadn’t been gunned down earlier this year at Ft. Hood (by one of their own). For some strange reason, people are honored as “heroes” these days for simply getting murdered.

In addition, it seems like the more the military fails in its job, the more it is revered and honored. Let’s review some of the most recent failures. Despite being advertised as a “defense” force, the US military has been unable to defend against:

· A handful of religious fanatics armed with nothing more than box cutters and a suicidal lust for 72 virgins (if you believe the government’s story).

· And now soft, pudgy psychiatrists who don’t even like to shoot guns.

The News is simply performing its primary duties of state apologist- to actively promote and preserve the myths of a benevolent state. They also want to stay in good graces with the powers that be, for it won’t be long until struggling, bankrupt, obsolete newspapers begin pleading for an Obama-blessed bailout.

It’s interesting to see who the runner-up for this award was- Capt. Chesley B. Sullenberger III, who back in January merely landed a US Airways jet onto the surface of the Hudson River as if the craft was designed for such a feat. The good Captain’s demonstration of incredible skill and concentration merely saved the lives of 155 people on board. Maybe if the saved passengers showed their appreciation by beating Capt. Sullenberger to death, he would have had a better chance of winning this award.

But then, how can you compare such a feat of life saving skill to the patriotic, inept, savage barbarism displayed by those in uniform, oozing from the Texas hill country to colonize the far reaches of the world? How can you compare Capt. Sullenberger’s measly water landing to The Troop’s whiz-bang shock and awe destruction of entire neighborhoods, coupled with creative, new torture techniques to apply to uncooperative evil doers? How can you compare the sight of scores of passengers awaiting rescue on the wings of that jetliner to the images of tens of thousands of desperate homeless, orphans and refugees searching for relief from their war-created misery? How can you even begin to compare the reality of hundreds of relieved and grateful family members, exuberant that Captain Sulley’s passengers are alive, with the increasing death toll of thousands of Muslims who are no longer a threat to the “Christian” way of life?

C’mon, these guys are HEROES! Sulley’s a sentimental wuss.
Posted by Enlightened Rogue at 2:46 PM

I’m reminded of some of the words you wrote shortly after the shooting:

“These soldier boys claim they protect me, but they CANNOT EVEN PROTECT THEMSELVES!!”

“While reading of this shooting, I noticed one very interesting fact--that a large, substantial collection of the most powerful fighting force in history had to call the local SWAT team to stop a lone gunmen from killing them.”

And now they’re the Texans of the Year!

You're right, Don. Incompetence performed while in the uniform or in the employ of the state is considered heroic.